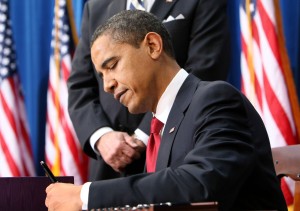 Congress has passed and President Obama has signed into law the deal extending the Bush tax cuts that he struck with Congressional Republicans. The legislation restores the estate tax for two years at a 35 percent tax rate, with estates up to $5 million exempt from paying any tax ($10 million for couples). If Congress does not change the law in the interim, in 2013 the estate tax will revert to what it was scheduled to be in 2011 — a 55 percent rate and a $1 million exemption. The $801 billion tax-cut bill makes several other significant changes to wealth transfer taxes:

But that window is open even wider than was previously assumed because of an additional loophole for the wealthy in the new law. Although taxpayers have until December 31, 2010, to transfer funds outright to grandchildren and avoid the generation-skipping tax, there’s the risk that the grandkids will squander the sudden influx of cash. As Forbes blogger Janet Novak explains in a recent post, “the money doesn’t (as most planners had believed) have to be distributed outright to the grandkids to qualify for the 0% rate. Instead, according to the fine print in the tax deal, it can be put in a trust for them, [noted estate planning lawyer Jonathan] Blattmachr says. That means, he explains, that money can be taken from an existing multigenerational trust, declared subject to the 2010 GST tax, and deposited in a new trust for grandkids’ benefit, with the GST tax now pre-paid at a 0% rate.” Novak says Blattmachr has been telling his estate planning attorney peers, “Cancel your ski trip or trip to Hawaii. This is a once-in-a-lifetime opportunity.”

The generous estate tax provisions were the main sticking point for progressive Democrats. A vote in the House on an amendment to increase the estate tax, including lowering the exemption to $3.5 million, was defeated by a vote of 233 to 194. After some minor changes to the bill were made, it passed the House by a 277 to 148 margin, after having been approved overwhelmingly by the Senate 81 to 19.

The site Politico quotes one senior House Republican aide as saying, “I’m trying to remember something that we passed under Bush that was this good.” The new tax law presents previously unavailable planning opportunities, especially for the well-off.

Just click on the following link to read the full legislation, titled the “Tax Relief, Unemployment Insurance Reauthorization, and Job Creation Act of 2010” as originally introduced.

This Blog/Web Site is made available by the lawyer or law firm publisher for educational purposes only, as well as to offer general information and a general understanding of the law, not to provide specific legal advice. By using this blog site you understand that there is no attorney client relationship between you and the Blog/Web Site publisher. The Blog/Web Site should not be used as a substitute for competent legal advice from a licensed professional attorney in your state.